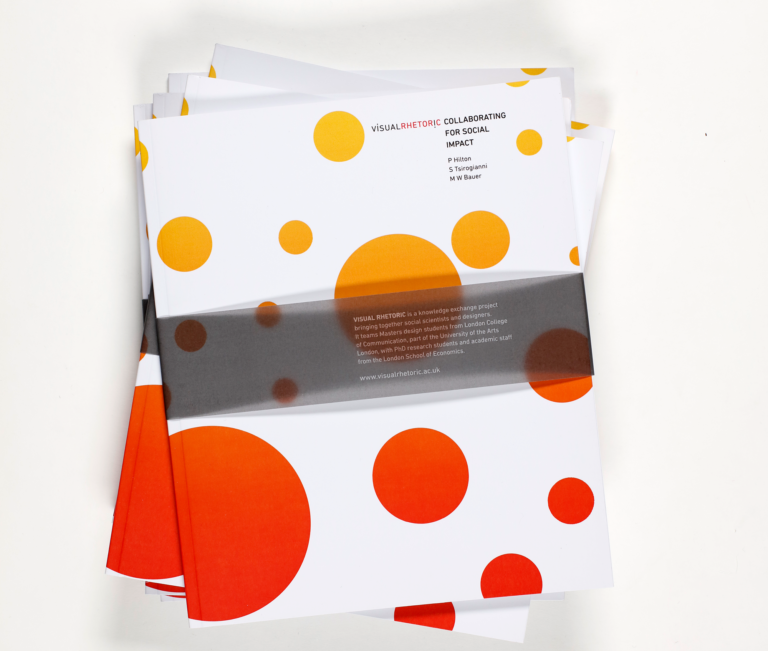 A lot of Penny’s work started life in the written form, be it an idea for a short film script or an academic paper. Her first job as a copywriter, is where she first developed the skill to articulate concepts and most likely instigated her interest in writing.  For someone who considers herself primarily visual and often restricted by the budget restraints a film production often imposes, the written word can be infinitely freeing.

Below is a selection of recent projects.

These are spreads from an LSE academic publication which serves to reflect on the 6 year research project Visual Rhetoric. A collaboration of graphic designers at the University of the Arts and social scientists at the London School of Economics, the publication called Visual Rhetoric Collaborating for Social Impact was co-authored by Penny Hilton, Professor Martin Bauer and Stavroula Tsirogianni.

The book proposes the next stages of the project and outlines learning with a view to setting a template for other institutions to follow suit.

More pages illustrating outputs from the collaboration. For more information on how this project worked and what it has lead to, are on the page Visual Rhetoric.

Penny’s book Design In Motion was published in January 2020 and looks at ways of improving your films through application of design principles. More details here.

An A to Z of how to conceptualise, provoke, contest and disrupt care. This illustrated book intends to help guide design out of the intractable and entangled challenges we face with care.

* Each entry in this A to Z was written and illustrated by its own author during the Does design Care (2)…? workshop at Chiba University, Japan. Only a few colours of paper, scissors and glue could be used to produce the illustrations.  This is the entry authored by Penny.

This is from a series of short poems about London life, this one published in a book called perceptions by Poetry Today an imprint of Penhaligon Press edited by Kelly Whitaker.

Years spent writing. Can’t throw anything out, it’s a sickness.